The quest for the identity of fencing 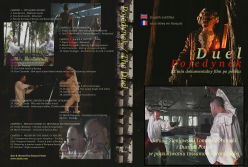 The following project resulted in a 52min long documentary film shot in Poland in 2002.
While interviews were obviously held in Polish both English and French subtitles are available on the DVD release, which is ready for distribution by keen production houses (authors' rights to be covered).
Another project (in French) never reached production although the script provided for 3 x 26min series and addressed a more French-oriented audience...

Janusz Sieniawski and Tomasz Abramski, today's leading professional sword masters in Poland, strive to arrange duels echoing historical truth. In spite of their boundless, long-lasting partnership their rehearsals can be quite dangerous. They swing genuine weapons at each other's throats without any means of protection.
Marek Poznański, coach of gold metal fencers, casts a doubt on the values of fencing depicted in the film industry. Piotr Czeczotka proves by examining and renovating blades that duels were perhaps less blood spattered than one might think. His tiny workshop is crowded with blades already glittering or awaiting a second youth.
The popularity of Asian martial arts has pushed aside the bequest of Roman and Byzantine empires at the detriment of European fencing. This film is boring because nobody gets killed and fights seem to last for ever. But that's the way we think it was...

Chapter 9 - Preserving the image of fencing